Starts Friday information will be posted every Tuesday.

At The Towne Cinema we run a Friday to Thursday show week. This means that new shows will start Friday nights and carry on until the following Thursday.

Showtimes for the week of February 28 - March 5 Lance Sterling (voice of Will Smith) is a super cool and charming spy, while Walter Beckett (voice of Tom Holland) invents the super cool gadgets Lance uses. When the world is threatened, they must learn to rely on each other like never before in order to save the day.

During WWII, Jojo Betzler (Roman Griffin Davis), an awkward 10-year-old boy, lives in Germany with his mother, Rosie (Scarlett Johansson). As members of the Hitler Youth, Jojo and his friends have to learn war games and how to blow things up, but the kids aren't that adept and manage to stab themselves with the knives they're given and blow up buildings that are not meant to be blown up. When Jojo is asked to kill a rabbit but can't bring himself to do it, he earns himself the nickname "Jojo Rabbit."

Discouraged, Jojo seeks solace in his imaginary friend, Adolf Hitler (Taika Waititi), who does his best to encourage the boy, while telling him stories of his own awkward youth. Meanwhile, Jojo discovers that his mother is hiding Elsa (Thomasin McKenzie), a teenage Jewish girl, in their home. Jojo doesn't know any Jews, but has heard they have horns and scales and hang from the rafters like bats. He decides not to tell the authorities, because he knows that would put his mother in danger, so instead he tries to find out all he can about Elsa, in order to gather information about Jews for the Nazis. As he does so, he has to endure Elsa's teasing, who makes quips such as, "Obviously we are demons who love money." 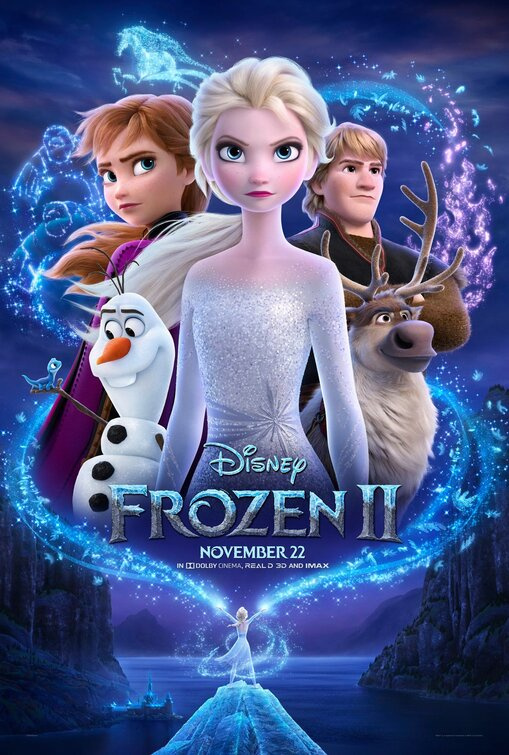 In this sequel to the 2013 hit movie Frozen, when Elsa (Idina Menzel) hears a voice singing a haunting tune, she remembers back to when she and her sister Anna (Kristen Bell) were small, and their father (Alfred Molina) told them a story of an enchanted forest, which was home to the Northuldra tribe. Unable to get the voice out of her head, Elsa goes on a dangerous journey north to Ahtohallan to find out what happened in the past between the tribe and her people, as well as to find out the truth behind her powers.

Although Elsa feels the journey is too dangerous for anyone else, Anna insists on going with her. Olaf (Josh Gad) the snowman happily joins them, as does Sven the reindeer and a lovesick Kristoff (Jonathan Groff), who's trying to find the right moment to propose to Anna. However, the sisters and friends become separated in the dangerous forest and have to find their way back to each other, while uncovering the past and righting past wrongs. 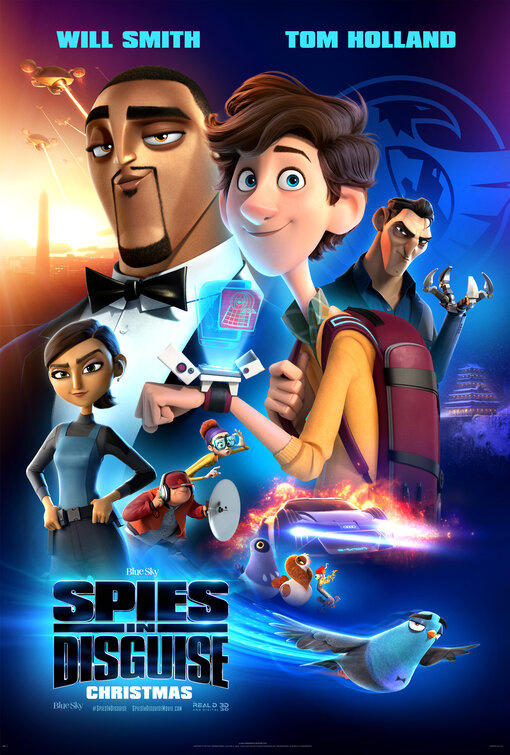 Lance Sterling (voice of Will Smith) is a super cool and charming spy, while Walter Beckett (voice of Tom Holland) invents the super cool gadgets Lance uses. When the world is threatened, they must learn to rely on each other like never before in order to save the day. Nightly EXCEPT Monday for the Okanagan Screen Arts

The Kim family, including high school graduate Ki-woo (Choi Woo Shik) and his sister, Ki-jung (Park So Dam), live in a cramped apartment in a grubby part of Seoul with their father, Ki-taek (Song Kang Ho), and mother, Chung-sook (Chang Hyae Jin). Unable to get jobs, they make some money folding and assembling pizza boxes for a nearby restaurant. Despite being unqualified, Ki-woo gets a job as an English tutor for an upper class teenage girl, Park Da-hye (Ji-so Jung).

Ki-woo meets the Park family, who live in a gated mansion with a high-tech security system. Da-hye’s father, Dong-ik (Lee Sun Kyun) is a millionaire tech titan. Also living in the luxurious home are Da-hye's younger brother, Da-song (Jung Hyeon Jun) and her mother, Yeon-kyo (Cho Yeo Jeong). When Yeon-kyo tells Ki-woo that her son needs an art teacher, he tells her he knows someone. His sister quickly Googles all she needs to know to take on the position, and gets the job. The siblings keep their relationship a secret and soon, the entire Kim family is employed by the Parks, after getting rid of the current staff. When a former servant threatens to expose the Kims, things get violent. Nightly EXCEPT Monday for the Okanagan Screen Arts

During the Civil War in America, we are introduced to the March sisters — a now-married Meg (Emma Watson), New York City writer Jo (Saoirse Ronan), and painter Amy (Florence Pugh), who is living in Paris with Aunt March (Meryl Streep).

Taking us back seven years, we see the March sisters living under one roof. Meg, Jo and Amy are living with their painfully shy sister Beth (Eliza Scanlen) and their mother Marmee (Laura Dern), while their father (Bob Odenkirk) is away serving in the Civil War.

The girls are thrilled to get a new next-door neighbor, Laurie (Timothée Chalamet), who immediately becomes a fan of the March sisters, but especially of the always flirting and teasing headstrong Jo. The movie follows the fate of each sister, as they each choose to follow their heart.

Based on the classic novel by Louisa May Alcott.